BOB FINGERMAN, New York NY
1) Jazz up their graphics. Really, Judgment Day is coming and that’s the snappiest ad campaign you could design? (All the best artists are sinners, that’s why.) Lame.
2) Try harder. Shed their clothes and try jumping up to Heaven, anyway (God Raptures those who Rapture themselves, or some such nonsense).
3) Get really pissed that God didn’t Hoover them up Heaven’s vac-hose and become Satanists.
4) If their clothes fly off for the Rapture, have an airborne orgy on the way up to Heaven (Oops! That’s a sin! And so close, too. Once you’re in Heaven, anything goes.).
5) Combine their goofy numerology with Sudoku (though Sudoku actually makes sense).
6) On May 22nd renounce their faith and join the world of the sane when once again Jesus fails to make his comeback.
7) Kill themselves. A giant mass suicide of soul-crushing disappointment. That would thin the herd of a few thousand nitwits. 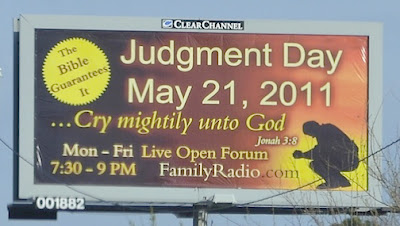 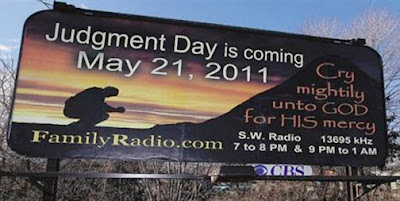 As a lifelong atheist, I'd like to propose a reasonable deal to these people: I'll repent and accept Christ as my lord and savior if the Rapture does arrive on May 21st. Presented with irrefutable empirical evidence, I'll admit I was wrong, even if it's the last thing I get to do. But when May 22nd rolls along and everything is the same as it's ever been (in other words, exactly what May 22nd will be), can they all renounce their faith and admit it's a bunch of nonsense? No, they can't. Because they'll find more excuses about how their math was off or whatever. They can always find a way to justify (I'd say "rationalize," but rational is never a part of their thinking) getting it wrong. Again.