POPS GUSTAV, Hoboken NJ
TG7 of 2008 (Late as per Usual)
The Bad and the Good, Most Intertwined

THE BAD
1) The Eviction
My building was sold and, after over 13 years, I was forced to leave my sweet deal…
2) The Lawsuit
…or so I thought. I discovered I was overpaying rent the entire time and was owed tens of thousands of dollars from my landlord… who decided he didn’t want to pay anything.
3) The Aging of the Parents
Getting old sucks. Watching your parents get old sucks more, and both of mine had serious problems in ’08. Happily, both ended the year doing okay. 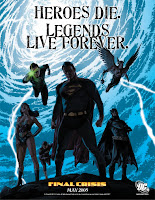 4) The DC Universe
While I don’t read a lot of comics these days, every once in a while I’ll try to follow the canon of my favorite characters. I bought the first three issues of DC’s FINAL CRISIS, but found the whole thing an incomprehensible mess. I give up.
5) The Campaign
Sarah Palin. ‘Nuff said.
6) The NOT Liberal Media
Any time anyone accuses the media of having a liberal bias, I have to laugh. And laugh. And cry.
7) THE SPIRIT
I have to say again, an absolutely astounding display of ineptitude. Avoid at all costs.

THE GOOD
1) The Apartment
The forced relocation prompted Lysa and I to get a place together, and after much searching (of soul, real estate and bank accounts), we ended up in our dream loft.
2) The Resolution
After a nasty four months, my lawsuit with the landlord ended with a settlement in my favor. Whew.
3) Support System
Friends, family and Lysa. Couldn’t have made it without them.
4) THE DARK KNIGHT
Okay, so I can’t follow Batman in the comics. But onscreen? Perfection. My pop culture highlight of the year, no contest.
5) The President-Elect
If we had lost this one, I was going to give up on this country. No lie. Here’s to hope.
6) THE DAILY SHOW / THE COLBERT REPORT
Another year of the best, most cathartic insight into our fucked up world.
7) Wine.
I take it as a point of pride that two of my favorite wines ended up in the top five on Wine Spectator’s Best Bargains of the year list.